Home » Why Python for Data Science is Industry’s Top Choice? 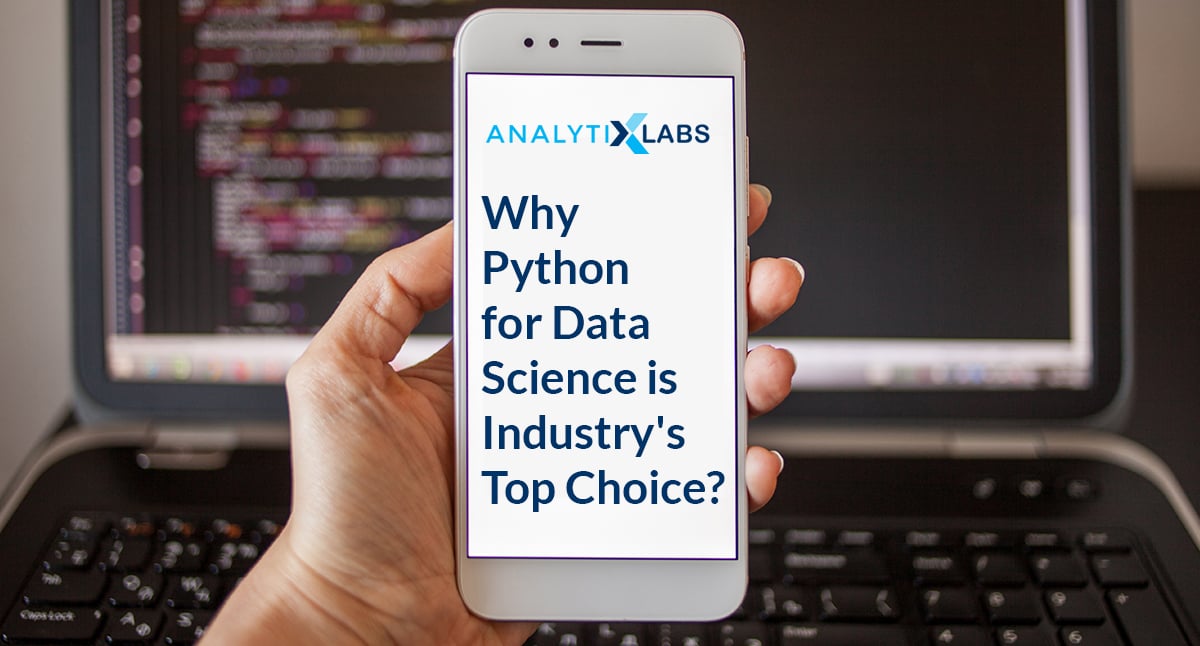 The phenomenal growth of the data science and its related applications across various industries is felt and observed in the last few years and in the year 2020, it continues to rise exponentially. With more types of data that are being generated, especially the sensor and IoT based data, the world has seen a fresh surge of Machine Learning requirements in the industry.

Among various survey conducted across the globe, in one such report, IBM has stated that the requirement of both Data Scientists and Data Engineers are going to grow by 39% in this year.

The meteoric rise of data storage, data handling and Machine Learning has kept both big and small service providers and industry players pondering on the question of the choice of tools to meet and resolve such monumental requirements.

They need a powerful tool and the same time, a versatile one to both meet the list of requirements and perform all the Herculean tasks with an admirable ease. Companies need to choose a tool by understanding the trade-offs between storage, pipelines, native coding, automation, sharing, speed and time-to-value and this is an exercise where things become complicated.
And the complications don’t exist because of lack of tools, rather it’s because of presence of a lot of tools that fit into the Data Science realm.

Amidst the cacophony of all the talks related to the choice of tools, one tool distinctly stands out in the eyes of the determined and ambitious Data Scientists/Engineers as the One Ring to rule them all. Pardon our Lord of the Rings reference, this One Ring happens to share its name with a snake – Python.

In this article, let’s try and understand why Data Science using Python is so popular and so widely used in the industry.

Python is an open source, object oriented and general purpose scripting language, released in 1991. It is dynamically typed and has implicit garbage collection mechanism.

Python supports both imperative and declarative programming paradigms that facilitate coders to natively create classes and functions and also use it as a tool where a mere re-use of predefined codes can get the entire work done in next to zero efforts. This is additionally reinforced by the modularity which makes Python tremendously extensible.

All these features may sound overwhelming to someone who might have just started contemplating to take up a data science training in python but that is never a reason of worry to begin with, owing to its simpler, less-cluttered syntax and grammar rules – which makes it one of the easiest languages to code and use by anyone.

In fact, the design of python code is so simple that it clearly differentiates itself from other traditional and modern languages alike – so much that there is a neologism called the “pythonic way of coding”.

How is Python perceived in the Data Science world?

Data Science using Python is undoubtedly in huge demand in the Industry. According to this 2019 report, Python leads the data science tools requirement with a share of 65% of the users who preferably use it for their tasks.

According to Indeed.com, a leading US based job search site, Python for data science stays atop other major tools in terms of the job listings and requirements and Python based tools and APIs such as TensorFlow, Keras, PyTorch, numpy and pandas seize the top keywords among these listings.

Most of the global top-tier consumer based companies – Google, Facebook, Spotify, Netflix, Reddit, Instagram – they all have pinned their faith on Python and other players too are joining the bandwagon.

Features of Python that makes it a tool of choice

If we start describing python, there are many trademark attributes associated with it and later when we try relating those to Data Science requirements, we would observe that many of these traits are highly essential ammunition to get our tasks done! In this section, let’s understand how the characteristics of Python fall in place.

Python is one of the famous open source tools available in the market and it is available for free to use basis. Open source tools in general are highly cost effective – this makes Python preferable over a paid tool for a small and medium scale organization.

Also, there are industry ready paid tools based on Python (Anaconda, GraphLab, plotly etc) which are available for a minimum and reasonable fees. This also makes Python more flexible in terms of building a stack. And at the same time, it doesn’t have the vulnerability for a vendor lock-in – one can easily switch between libraries and APIs within Python without incurring any fees.

Ease of Learning and use

Many of the Data Analytics and Business Intelligence users usually use human-interactive and event driven tools like MS Excel etc. or they use tools that require minimal and easy coding like SQL, SAS etc. Python on the other hand is a full-fledged computer language which can scare a non-programmer in the first glance.

However, this fear is mere sham because for a beginner to Data Science learning, a Trainee can easily learn and get accustomed to various features even with no prior exposure to programming. The learning curve is gradual and the code looks pure English. Major Data Science activities – data manipulations, EDA, graphs, Inferential Stats, Predictive Modelling, reporting etc. can be done with minimal amounts of coding.

With its already existing vast implementations across various organizations, it is no surprise that Python comes equipped with production-ready APIs and libraries that are usable for all the typical and extended activities of Data Science stack – data acquisition, data manipulations and data explorations, modelling.

Scrapy, BeautifulSoup along with Python’s support for Selenium gives amazing data extraction capabilities. Numpy, Pandas, Scipy, SciKit-Learn, Keras, Tensorflow, PyTorch are some of the data processing and modelling libraries available for free usage. So, from implementation point of view, an organization that strives to use Python for their activities, they can highly rely on it.

You may also like to read: 50 Ultimate Python Data Science Libraries to Learn

Scripting in general is writing miniature programs that are designed to automate a task or a part of a task. Python scripts comprise of functions that are imported via modules, packages and other Python based scripts and they can be implemented quickly, on the go!
Most of the complicated tasks can be implemented with lesser code and Python’s interpreter processes it within no time. For a user or a developer who is aiming to build a complicated stack for their requirements fulfilment, Python scripting makes their life easier to implement.

This ease is one of the reasons why Python is a desirable tool and also it is another good news for a new learner.

Data visualization is the process of visually communicating data or information by using various entities like points, lines or bars contained in graphics and it is an inseparable component of a Data Science project.  Python offers multiple versatile graphing libraries that come bundled with numerous features.

Most of the Data Science development in Python is done on a choice of IDE or Jupyter Notebook but there is always an issue of deployment and presenting the outputs, in any tool that is being used. Usually, once a model is built, it is shared to an app developer who integrates it with a larger app. Python provides web development libraries such as Flask, Pyramid, Django to create a native web application and then integrate the Data Science components to it.

This feature eliminates the requirement of learning and using a different language for web scripting and application development and organizations can easily build robust and deployable web applications without much effort.

One heads-up however is that web-application development skills is something which is out of scope for Data Science and it is a field of its own. Despite the complexity, if one is trained on the above modules, one can build complex web applications quickly and with minimal lines of code.

Python is a relatively old language (released in 1991) and currently, it has a vast amount of users and equally vast number of users across the globe. According to a 2019 survey from SlashData, there are now 8.2 million developers in the world who code using Python and that population is now larger than those who build in Java and C++. It attracts seasoned professionals and new-comers all alike and according to Stackoverflow.com, over 31% of users have an experience of less than 2 years.

This results in a massive group of enthusiasts who keep up with the traditions of Open Source nature and share lot of support online on various QnA sites, blogs, forums etc.

The Python Enhancement Proposals (PEPs) released by Python.org attract many developers across the globe and drive Python’s evolution. Added to the user support, big players like Google, Twitter, Dropbox etc. contribute to the continued growth of Python as a language and a Data Science tool.

We have closely observed that Python’s compatibility and easy to use syntax makes it the most popular language in the Data Science realm. One should keep in mind the wide variety Python libraries available for basic to complex tasks.

In the year 2017-19, there has been a lot of improvement and evolution since the release of the AI library TensorFlow, which addresses most of the modern requirements of video and image and text processing and workflows in Data Science. This opens up many avenues for implementing those models that help us deal with Computer Vision related solutions.

To think of all the complex tasks, one doesn’t need to worry with development as there’s enough support out there to ensure a promising completion of tasks without stalling. Learning Python for data science is time well spent as big data and machine learning become more common in business, the demand for more Python-skilled practitioners is set to rise.

You may also like to read a detailed comparison: Python vs R vs SAS – Best Machine Learning Tool!

101 of Artificial Intelligence (AI) - What to Know as a Beginner?

The Demand For Business Analytics Courses? 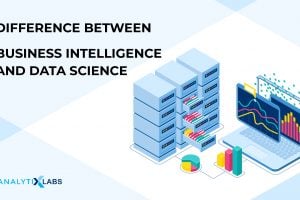